The most powerful words we can say to our children

Is a person’s success the product of good genes? Or can success be learned? Dr Justin Coulson examines the growth mindset, and explores the ways in which it can alter your child’s life – forever.

Think about these statements and decide whether you would agree with them or not:

If you subscribe to the first statement, you have what psychologists call a ‘fixed’ mindset. You believe that when it comes to being smart, or athletic, or even being moral, you (and your children) have been given a certain amount of intelligence (or other attribute) and that’s all there is to it.

People with a fixed mindset often say things like, “That family missed out when the intelligence genes were being distributed.” Or “Some of us just aren’t very good at running (or swimming, or reading, or singing).”

But people with a fixed mindset also say things like, “Wow, you’re a natural.” They comment that, “It’s just in his blood, that’s why he’s so good at it.” And they often believe that, “It’s got to be in you. You can’t learn that stuff.”

If you agree more with the second statement, you have what psychologists consider a ‘growth’ mindset. You believe that when it comes to being smart, or athletic, or even being moral, you (and your children) can develop and improve and become much better by simply practising, and seeking for mastery. You don’t worry about whether you’re any good at something or not. If you want to be good, you practice. You know that effort brings rewards.

People with a growth mindset say things like, “Wow, the kids in that family always work so hard at studying. No wonder they do well on tests.” Or, “I know you just got completely defeated in that game and it felt awful … but how do you think you can do it better next time?”

The growth mindset teaches that if you never try, you’ll never get any better, so have a go, be consistent, and you will be amazed at how much you can accomplish. (Note that it does NOT teach that if you practice, you’ll be the best at everything. It simply teaches that when you work hard at something you get better at it.)

Think about what these two mindsets teach our children. When we tell them they’ve either got it or they don’t, are they going to be willing to try? Typically not - unless they’ve got it. Then they’ll approach any task. But avoidance is their strategy if they “don’t got it.”

The growth mindset promotes a resilient response. Following failure or setbacks we say, “You know what, everyone fails at first. But fail just stands for first attempt in learning. If you keep trying I know you’ll get better at it”. Persistence pays off. Watch what you say!

When our children do something well, it is an almost instinctive response to praise them. I observed one mother in a park talking to her three-year-old son recently:

I wanted to call out, “Hey, nice praising!”

In our society it has become intuitive that we ‘pump up our kids’ tyres’. We have been taught that you ignore the bad and praise the positive. There are posters proclaiming 100 Ways to Give Praise - but they’re sending the wrong message! Research by scholars from around the world shows that when we praise our children, we actually give them a sense that the attribute we are praising them for is ‘fixed’. We are pushing them into a fixed mindset when we tell them how smart, sporty, musical, artistic, awesome, or creative they are.

I was so fascinated by this research that I conducted my own study at the University of Queensland with around 100 participants. I asked them to complete an easy puzzle task. Half of them were randomly praised for their intelligence. I said, “Wow, you’re really smart. That’s an awesome score. You got 10 out of 10.”

The other half received no praise. I just told them their score: “You got 10 out of 10.” Then all of the participants completed a very challenging puzzle task which they all failed. Badly. No praise was given. It was a setback - and they all found failure uncomfortable.

The results were astonishing

Praised participants were significantly more likely to choose the easier puzzles – almost as if they had to prove how smart they were by getting another high score. Thus, their motivation for challenge was reduced!

Additionally, they scored significantly worse the second time around than they had the first time. It was almost like the pressure to prove their intelligence clouded their thinking. They couldn’t perform as well. They were avoiding what was hard, and approaching what was easy so they could feel good about being smart … but doing the easy ones reflects lower, rather than higher, intelligence! And they still underperformed.

What this means for our children

If our child aces a test and we say, “Wow you’re so smart. I’ve got a genius for a daughter” we teach her that performance matters more than process. We get her hung up on how intelligent she is. She feels nervous about how she’ll perform next time. And if she experiences a subsequent setback (which is almost inevitable), she’ll wonder “Am I really smart?” Then she’ll conclude that she must not be, otherwise she would have done better.

If our child paints us a picture and we proclaim, “That is the most beautiful picture I’ve seen!”, where does he go next time? If we are less enthusiastic does that mean he’s no longer such an amazing artist?

Research indicates that rather than telling our children how good they are (and pushing them into a fixed mindset that promotes uncertainty, potential for negative self-evaluation, and an emphasis on outcomes), we should describe what we see. We can point out the process we’ve observed them going through. This promotes a focus on improvement and mastery - a growth mindset.

“Wow, you played that song on the guitar so well - you’re a natural” (fixed mindset) we can say,

“Last time I heard you, I couldn’t even pick out the tune. Now I know exactly what you’re playing. How did you improve so much?” (which focuses on effort and growth mindset).

“You blitzed that exam. You’re so smart” (fixed mindset) we can say,

“Tell me about how you got that result. I saw you doing heaps of study and working really, really hard” (which focuses on effort and growth mindset).

“It feels awful when we’re not as good at things as our friends. What can we do to get better?” (which focuses on effort and growth mindset).

Perhaps the best thing we can do beyond watching our words, avoiding praise, and emphasising effort, is to be an example. Make a resolution to do something new - something that requires effort - by the end of the year yourself. Perhaps you can learn a song on an instrument, run 10km (or 5km), or take an art or cooking class. Maybe it’s time to enrol in that university course you’ve always wanted to do.

Focus on the process. Focus on mastery. The performance will take care of itself. What matters most is this: You can do almost anything if you try. That’s what a growth mindset is. And that’s the one simple thing parents can teach their children, that can change the success trajectory of their entire life.

What phrases do you say that help to teach a growth mindset with your children? 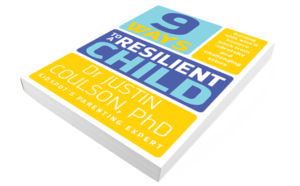 Read more about the Growth Mindset and the problem with praise in 9 Ways to a Resilient Child and the accompanying online program.