My 7 yr-old Only Eats Chips 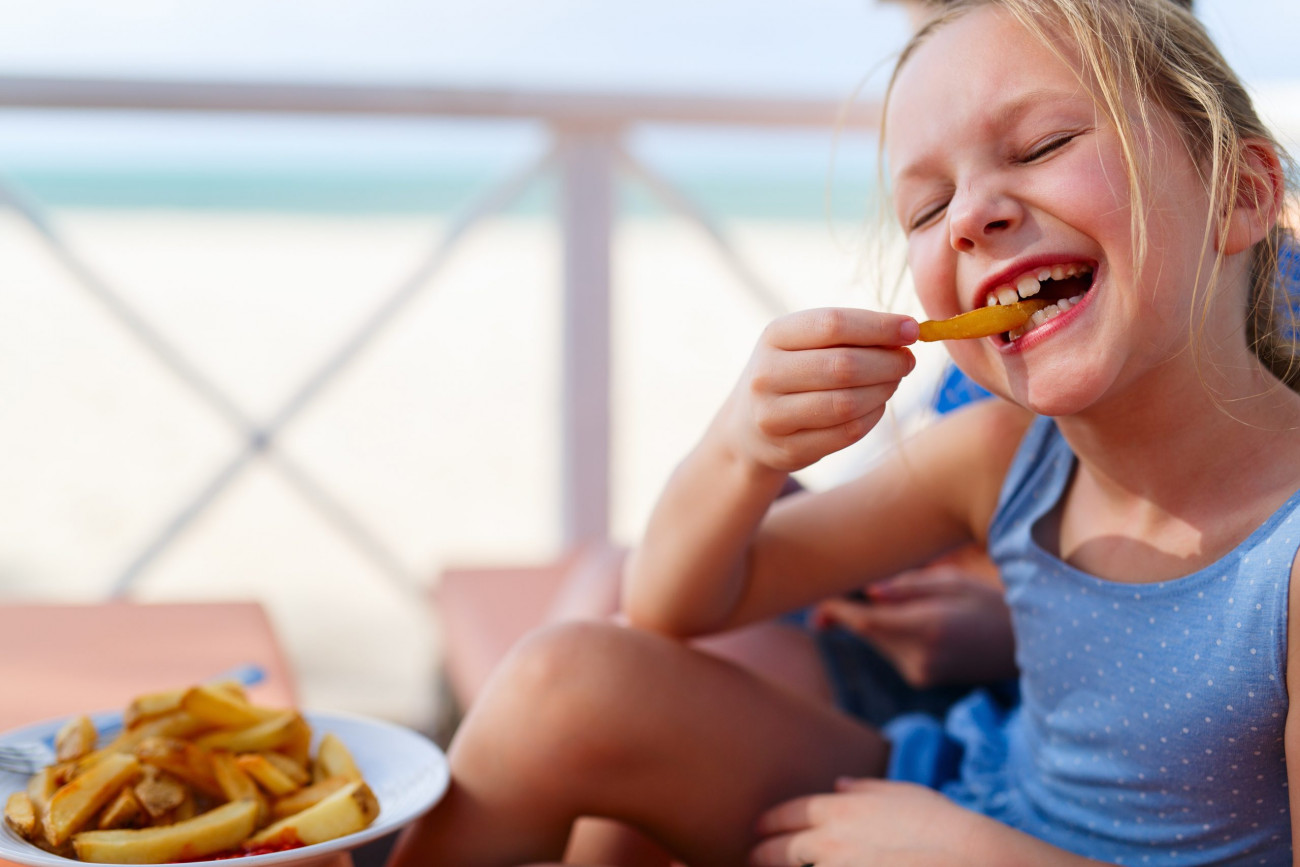 Dealing with a fussy eater can be a challenge. Poor eating habits in middle childhood and the tween years tend to be long-lasting. We need to take them seriously.

My beautiful 7-year-old refuses to eat anything apart for a selected variety of high fat carbohydrates such as chips and chicken coated in breadcrumbs etc. She tries to throw up every time we feed her fruit or vegetables. Any advice? We need some.

Few things upset parents as much as when children refuse to eat. It drives us crazy! And the reasons we get so upset might not be so obvious until we really stare them in the face: First, we care about our children’s health and we want to see them eating well, gaining sufficient nutrients, and thriving physically. We know how important it is that they eat, and refusal due to fussiness can be a source of anxiety.

Second, parents are most likely to be concerned (and get mad) when food refusal (let’s call it fussy eating for the rest of this article) happens again and again. Typically a refusal to eat isn’t an issue if it only happens once. Or if it’s only related to one meal now and then. The compound effect of refusal after refusal is what prompts parents to be worried.

When we are concerned our child isn't eating meal after meal, day after day, we get mad. But we often don’t express our worries well, particularly under pressure, and so they bubble out of us in frustration and anger.

There are also a few other reasons we get upset about kids’ refusal to eat:

Although we have the best of intentions, our most common responses to fussy eating tend to be counterproductive. They include:

These, and other common responses, may work in the short-term. But the long-term impacts of power plays and appeals to authority have been associated with  poor health ,  poor body image , and  limited success  in helping children make healthier choices when they can decide what to eat by themselves.

"What should I do instead?"

Before we get into specifics around what  you  can do, it’s important to take a step back and look at the big picture. As parents we can get so caught up in our own worries and frustrations that we can forget to see the world through our child’s eyes. It’s important to pause and take their perspective. We might discover that: We have a child who has specific likes and dislikes Guess what? Your child is just like you! Maybe you can’t stand coriander? It could be that olives aren’t your thing. Or maybe you cannot stand mango or apricot, but you love cherries. We all have foods that work for us and foods that don’t. That’s actually ok. It’s important to recognise this. It might not be fussiness. It might just be that they really don’t like zucchini and you keep serving it up! We have a child who has sensory challenges or allergies Some children are pretty willing to eat food, but it doesn’t agree with them in some way. Textures affect them in peculiar ways, they feel discomfort when they eat certain foods, or their temperament is affected. Children on the autism spectrum are particularly challenged this way, but it is not unique to these children. It can happen to anyone for a range of reasons. My wife, for example, just doesn’t like the texture of lettuce… so she doesn’t eat it. We have a child who is a food neophobe. This means that your child is literally afraid of new foods. This is a very uncommon disorder, but it can occur from time to time. Being mindful of these issues can help reduce the stress and tension around eating and children. We can be more accommodating, more patient, and more willing to work with our children when food issues arise. Let’s look at solutions and strategies to help when things get maddening at mealtimes.

We get to do this several times each day by ensuring that the majority of our own food choices are healthy ones. Don’t be overly rigid around food. But at the same time, show and teach that a balanced diet means that junk is a rarity, rather than a daily habit. In simplest terms, there’s good food, and there’s ‘sometimes’ food. Eat lots of good food, and have ‘sometimes’ food… well, sometimes. Oh one more important thing when it comes to modelling:

If you complain about food, your kids will too. If they see you being fussy (about lettuce, coriander, tomatoes, or whatever) they’ll learn to do the same. And if you make a big deal about how eating too many carbs is bad for your belly, they’ll pick up on that and develop a fear of certain foods, or a belief that food is not great for them.

Have a  conversation  about food (but not at the dinner table while she’s refusing to eat). Ask your daughter why we eat and talk to her about how ‘food is fuel’. When we put the wrong fuel into a car, it breaks down. The same principle applies with our bodies. Ideally your daughter will actually have some reasonably good knowledge about the need for healthy food and you can gently fill in the gaps. Obviously you can have a much more detailed conversation with a 7 year-old than a pre-schooler, but remember not to go too deep. Invite her to develop solutions to the divide between her knowledge and her behaviour. Chances are that she knows what is good and healthy, but she simply doesn’t want to act on her knowledge. We call this the Explain phase of Effective Discipline.

If you expect your daughter to hear your rules, slow it down and hear her perspective. Maybe she does only eat yellow processed foods. But perhaps she is actually happy to eat several other foods, but you’re not providing them? Listen, understand, see the world through her eyes.

The more food rules your daughter can develop for herself, the more likely it is that she’ll be open to making good decisions. The data is clear: when we have an approach to limit setting that is collaborative (and one that removes force from the equation), the power struggles disappear and children start eating. One family I helped gave their daughter the option to organise her own food if she didn’t like what was served. They developed guidelines based on her daughter’s preferences and their knowledge of what is healthy, and the conflict ended.

If your child is fussy but you’re willing to give them some control, remind them that the more colour there is on their plate, the happier you’ll be with their food decisions. A colourful plate usually means a variety of vegetables. Another family had a fussy 6-year-old. They explored, explained, and then empowered their child to identify something colourful they would eat. The child decided that cucumber was their green vegetable of choice, and spinach leaves were ok as well. While it was not the parents’ perfect solution, they saw colour appear on their child’s plate for the first time in months and the power struggles stopped.

Love her, regardless of what she eats

Don’t link food with your daughter’s behaviour. It shouldn’t be used as a reward or a punishment. When we use it as a reward, we encourage unhealthy eating (since unhealthy foods are usually offered as rewards), and when we remove food as a punishment (“no sweets for you tonight!”) we invite anger, resentment, and resistance. Oh, and we turn food into a power struggle. If you want your daughter to eat good food, serve her good food. Put simply, your daughter eats food that is not ideal because it is what you serve her. At this age, she eats what is available at home. So it’s up to you to get your house in order. What are you doing diet-wise? Who buys her food? Who prepares her food? Who puts her food on her plate? In most cases, it will be you. Any change will be challenging, but careful explorations and empowerment can alleviate much of the struggle. Make gentle changes and involve her where you can. There may be some food refusal and some tantrums. Be patient and understanding. Eventually, so long as she is only offered healthy alternatives, your daughter will eat the food she is served because she will be hungry. You also need to do the following:

You are the gatekeeper.

Be intentional bout what you’re offering, have gentle conversations about what she feels and how you can both get what will work for you (preferably before you make the changes), and then stay firm.

Note: This advice is general. Your email doesn’t contain enough information for me to provide specific advice for your individual circumstances. If your daughter experiences any significant weight loss or goes too long without eating, or if your daughter has any sensitivities, I recommend seeing a GP and/or a psychologist who can give you individualised counsel that will take into account circumstances not evident in your email.

Read more about dealing with a fussy eater in my eBook Eat Right Without a Fight. Raising Happy & Healthy Eaters.